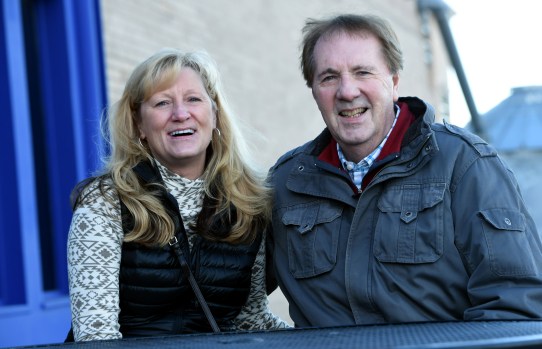 Stan Turner was drinking a cup of coffee and reading the newspaper at a downtown Stillwater coffee shop when he realized something was terribly wrong.

“I felt something strange in the side of my head,” said Turner, a longtime Twin Cities TV and radio broadcaster, remembering that day in September. “It was a sensation I had never felt before. It scared me. I didn’t know what it was. I was lucid, I was OK, but there was something clearly wrong.”

Turner grabbed his book bag and headed to his Toyota Camry parked nearby. He planned to drive to Lakeview Hospital to get checked out.

He never made it.

While exiting the parking lot, turning south on Water Street, he blacked out. The Camry continued across the street and struck a parked car.

Turner woke up in an ambulance en route to Regions Hospital in St. Paul, where doctors discovered two of his coronary arteries were completely blocked and a third 90 percent blocked. Turner, who for many years hosted the “All Request and Dedication Show” on KLBB-1220 in Stillwater, underwent open-heart surgery and spent 11 days in the hospital, then six weeks recovering at his daughter’s house in Woodbury.

“I’m a very lucky guy,” Turner said in an interview last week. “They tell me I’m headed in the right direction. I feel stronger almost every day, but to be blindsided like that — whoa.”

Turner says he owes his life to the paramedics who resuscitated him several times en route to the hospital, and to the doctors and nurses at Regions.

“It sounds like a cliché, but they are miracle workers,” he said. “They really are.”

He said he had never felt the “proverbial elephant sitting on your chest” or any pain radiating down his arms. “Nothing like that, no shortness of breath,” he said. “I’m not a smoker. I’ve always avoided red meat. Fried food, I stay away from. I thought I was being a good boy. It blindsided me.”

Both his mother and maternal grandmother suffered from heart problems, so “it must be a hereditary thing,” he said.

Turner estimates his Camry was traveling 5 mph on the afternoon of Sept. 18 when it struck the unoccupied Lexus.

“Thank God there was nobody walking or driving nearby,” he said. “My foot was stuck on the accelerator, so the wheel was spinning. I understand it attracted a lot of attention.”

Officer Austin Peterson of the Stillwater Police Department arrived at the scene just after the crash occurred around 2:15 p.m. For that, Turner’s daughter, Laura Turner Schubkegel, is grateful.

“It’s a miracle that no one, including Dad, was hurt,” she said. “There are so many what-ifs that could have happened. He could have ended up in the St. Croix River. Everybody was in the right place at the right time.”

Turner knows he made a serious error when he tried driving himself to the hospital.

“I should have asked for help right then, absolutely,” he said. “I guess I was scared. I don’t guess; I was.”

He recommends that everyone of a certain age see a doctor and “get yourself checked out.”

“Just take care of yourself, even if you’re not having any symptoms of anything,” he said. “If you think you’re OK and you don’t need to go in for a checkup and think, ‘Oh, I’ll do that in a couple of years,’ no, do it now. Do it now.”

Although some hospitals are nearly full because of a surge in coronavirus cases, experts still recommend seeking preventive care during the pandemic.

When the weather is nice, Turner, who lives in Oakdale, goes several times a week to the Daily Grind Espresso Cafe in Stillwater for coffee and a muffin.

“I like the city,” he said. “It’s gorgeous out there on the deck. It’s just a beautiful place to while away a couple of hours there in the summer.”

Turner, a former news anchor and news director at KSTP-TV and former news director for the Minnesota News Network, worked for KLBB in Stillwater from 2004 to 2018. A year after the station went off the air, he planned to broadcast out of a new space in Heimie’s Haberdashery in the Hamm Building in downtown St. Paul. The pandemic put those plans on hold.

“We’ve been talking about possible podcasts, but nothing has come of that,” he said. “I do miss doing the show. Fortunately, a lot of people say they miss it, too. We’d like to meet again over the airways — via podcast or livestreaming or whatever it might be.”

For now, Turner is focusing on his recovery. He undergoes rehab at M Health Fairview Clinic at Woodwinds Hospital in Woodbury twice a week and walks regularly at the Maplewood Mall.

“I’m kind of back to doing what I did before,” said Turner, an avid walker. “I just want to keep things going in the right direction.”