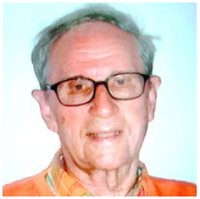 Bohmbach, Clifford R. of Minnetonka, died peacefully on Nov. 17, 2016 at the age of 97, surrounded by his family. Cliff is survived by Winnie, his wife of 69 years; three children, Ann (Jay) Simons, John (Mory) and Mary; 6 grandchildren, Molly (Aaron) Brinkman, Betsy (Chris) Kilmartin, Kevin (Angie) Simons, Pat (Miranda) Bohmbach, Mike (Cassie) Bohmbach and Joey (Andrea) Bohmbach; 5 great-grandchildren; and sister-in-law, Margaret Gibbs; numerous nieces and nephews. He was preceded in death by his parents and five siblings. Cliff was raised in his beloved hometown of Red Wing, MN. He excelled in track, basketball, and football where he lettered in all 3 sports. He attended college at Northeast Missouri State in Kirksville, MO, where he earned letters in all 3 sports. He obtained his master's degree from the University of Minnesota in 1949. In 1941 he joined the Navy and was the CO of an LCT in the South Pacific. Following the Navy, he returned to the U.S. where he got his first teaching and coaching job in Ortonville, MN. He met Winnie there, where they later married. They lived in Northfleld and St. Louis Park before he retired in 1983. He enjoyed a life of teaching Physical Education, Health, and Social Studies. His greatest satisfaction was in coaching and working with student athletes. The family would like to thank the staffs of Chapel View and Golden Living Care Centers, as well as Park Nicollet Hospice for their care and compassion. Memorials preferred to St. Louis Park High School - Athletics Dept., 6425 W. 33rd St., St. Louis Park, MN 55426 or your local food shelf. Private interment. Memorial Mass of Christian Burial 10:00 AM Tuesday, Nov. 29, with visitation one hour prior at the Church of Immaculate Heart of Mary, 13505 Excelsior Blvd., Minnetonka. Visitation Monday, Nov. 28, 5-7 PM at: Washburn-McReavy.com Strobeck Johnson 952-938-9020 1400 Mainstreet, Hopkins.